Forum for questions and support relating to the 1.32.x releases only.
Forum rules
Post Reply
3 posts • Page 1 of 1

I'm running Ubuntu 19.04 with seven Reolink Reolink cameras consistently for the past 6 months. I'm running version 1.32.3 of ZM. This machine strictly runs ZM headless and nothing else.

Prior to a few weeks ago, I was seeing CPU loads around 7 to 8 on average on an intel Xeon machine that has 12 cores. My shm was hovering around the 75% with 16 gigs installed and so I decided to double the amount of memory by throwing in another 16GB.

Before turning the machine off I updated all of the software and then shut it down. After installing the memory, and starting up ZM, I'm now seeing CPU loads anywhere from 9 to 12 (see below) and I can't determine why the increase in CPU load is now all of a sudden there after only performing software updates and increasing the amount of ram and without changing any parameters in ZM.

I've turned off all of the cameras and slowly added each one back in to see if it was a single camera that was causing the issue, but the only thing that I seem to notice is that after adding a fifth camera CPU usage seems to jump. It doesn't matter what camera I add before seeing the jump so I don't see a correlation there. 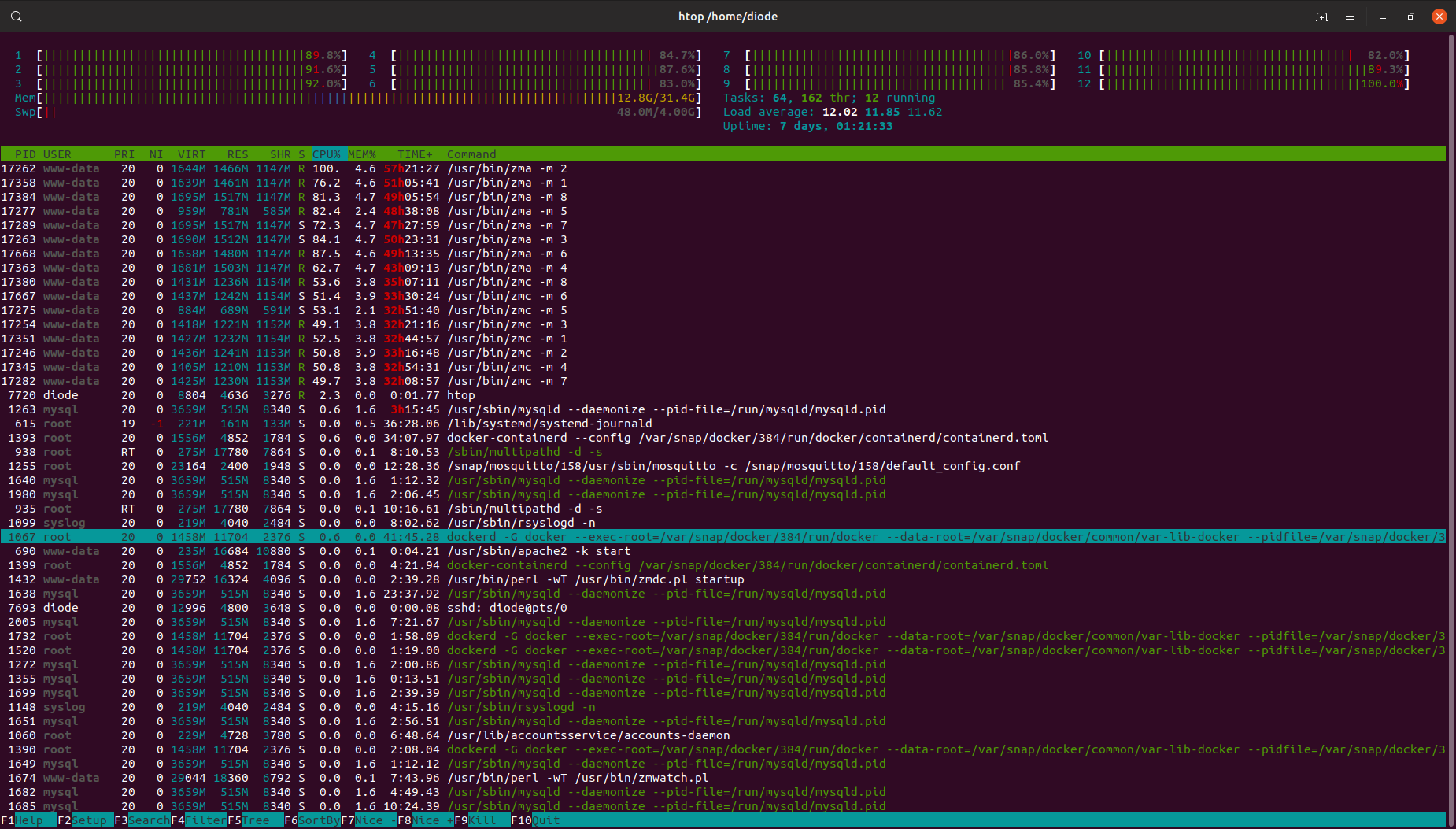 So, my questions for the forum:

1. Are there any camera settings that would be impacted with the increase of system memory? If so, what would those be?

2. Is anyone aware of any Ubuntu, or Linux, recent updates that would have cut the CPU performance of the machine.


Thanks in advance for any feedback.
Top

Re: Performance Issues After Increasing Ram and/or Software Updates?

Best and simplest next step is to pull out the 16gb of memory you added and re-test. If the cpu load goes back to what it typically was before the memory upgrade then it's probably memory related. But if the performance remains as it was post-upgrade - or worse - then something related to the software updates should be investigated.

I've seen instances of servers showing markedly poor performance after adding more memory. In those cases, they were actual rack servers with motherboards that had 16 (or more) DIMM slots. For example, fully populating all the DIMM slots with the fastest supported DIMMs caused the motherboard BIOS to actually downclock the ram to a measly 800mhz. Yikes! In that case, leaving four DIMM slots (out of 16) unpopulated "fixed" the problem.

I've also seen a few non-server motherboards have ram timing issues if all DIMM slots are occupied. In those cases some were newer motherboard releases and the issues were eventually fixed in a subsequent BIOS update.

Could also happen if the 16gb of ram you added isn't a perfect match with the ram already installed. So double check the pre-existing ram & new ram are the same and have the same JDEC/SPD profiles. IF they are different, some motherboards can handle this so long as you install the dimms in the correct DIMM banks. Otherwise you can have mismatched DIMMs in the same bank - which can cause problems.

Haven't played with Ubuntu 19.x yet, so can't comment on the current updates.
Top

Re: Performance Issues After Increasing Ram and/or Software Updates?

Thanks for providing such a thorough response! I was going to go back in and swap out the old memory to see if that makes any difference to try and eliminate the causes of it, but I just haven't had a chance yet. I did notice that the new memory is the low voltage (1.3) versus the 1.5V of the other (4) 4GB sticks. The latest memory I added were only (2) 8GB sticks of the low voltage memory--is it possible that running only a single pair of memory modules would cause an increase in CPU usage? The motherboard has 8 total slots available for memory installation with a total of six (6) of them filled now.

I'll poke around a bit hopefully this weekend and try and report back. Thanks again!
Top
Post Reply
3 posts • Page 1 of 1