Forum for questions and support relating to the 1.30.x releases only.
Forum rules
Post Reply
7 posts • Page 1 of 1

I spent the weekend upgrading Ubuntu 17.04 now quite long out of support to 18.04 LTS. To give myself time and ease of rollback, I grabbed a new SSD and started fresh knowing I can plug in the former build and get the server is back online.

So I followed the wiki https://wiki.zoneminder.com/Shell_scrip ... all-bionic which worked a treat. Thanks for that!

After standing everything up on the same hardware, DB restore, config and everything is mirrored, sits at double it's former utilisation. Both installs are ZM 1.30.4

Both measurements are after a few hours so the server is "settled" doing it's thing. I've since rolled back to the 17.04 SSD so I can troubleshoot.

The only differences are the 17.04 was actually a Desktop build, I kept the 18.04 to the server only and only installed the dependencies as I wanted to keep it trim... Both were running an OpenHab instance also, but it runs pretty light.

If anyone can give me some starting points to look at the camera streams themselves, I can see it's all across the ZMC's and all are just a 2%ish higher
Nothing obvious in the logs... if I didn't know it normally ran at half the utilisation I'd think it was a healthy build (aside from over utilising the 4 available cores...) 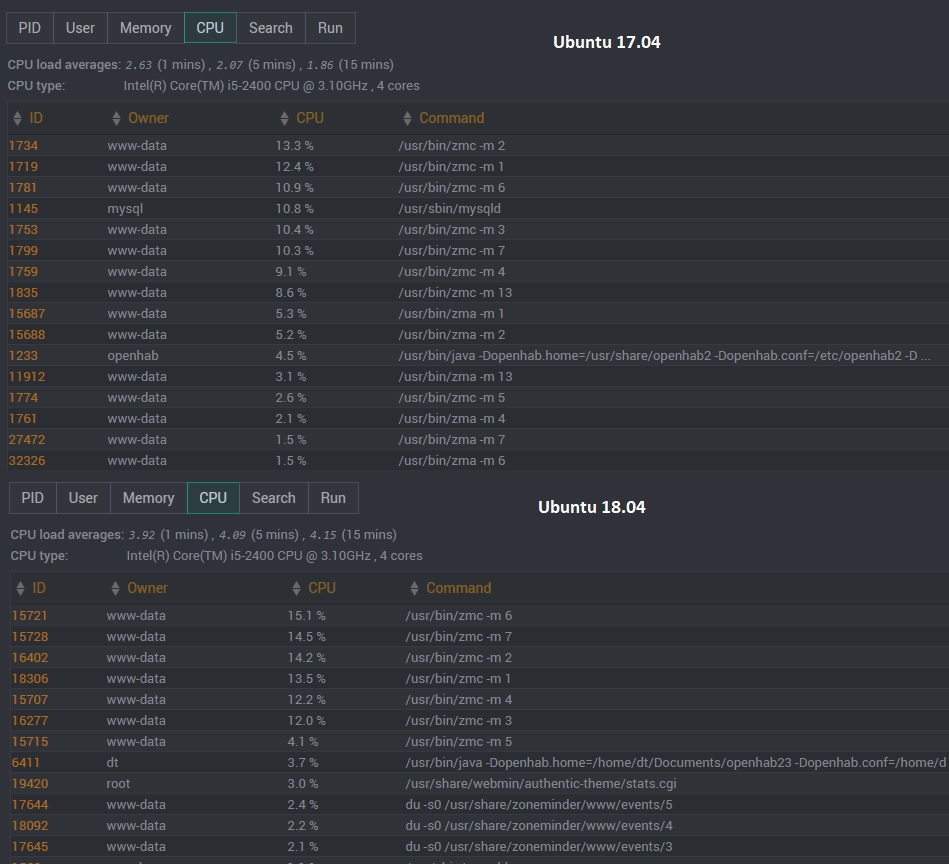 I'm assuming you upgraded the same PC/server to 18.04 - so, no hardware changes (other than the SSD).

So, according to this: https://blog.ubuntu.com/2018/01/12/melt ... tus-update , 17.04's kernel never got any of the Spectre or Meltdown mitigations. However, 18.04 does have all the mitigations. The mitigations result in a big hit on performance and especially related to I/O (eg: disk, net, I/O related to buffers/caches in memory, etc.). The performance hit varies from case to case, but in general a hit of 20-30% is common. High I/O apps (like zoneminder) can take a bigger hit than that. Really depends on the app and CPU. At the moment, AMD CPUs (in general) only need mitigations for Spectre. However, Intel CPUs (in general), need mitigations for both Spectre and Meltdown.

The mitigations can be turned off through kernel boot options: https://wiki.ubuntu.com/SecurityTeam/Kn ... onControls

If a system/server is on a well protected subnet and is not used for accessing the internet (ie: people using web browsers and the like), then some sysadmins may choose to disable the mitigations. It's a classic choice quandry: performance vs risk.
Top

Good one! I should have thought of that, I remember when we patched Spectre at work and seeing up to 15% performance hits, but those are proper enterprise servers, not my flogged out consumer level already high I/O ZM server - credit though it's run for about 6 years 24/7 smashing camera feeds without issue.

Thanks for that, you've given me something to test tonight. Exactly what I was after!
Top

Did you do a minimum install with a net install iso? I use that in lieu of a server install as I can get a really minimal system. I do not need the containers or other stuff in a server install to run ZM. I have not noticed a performance hit with Bionic but have to admit my test platform uses just a couple of cameras on an i3 with a laptop hard drive.
Top

bbunge wrote: ↑
Mon Aug 06, 2018 2:43 am
Did you do a minimum install with a net install iso? I use that in lieu of a server install as I can get a really minimal system. I do not need the containers or other stuff in a server install to run ZM. I have not noticed a performance hit with Bionic but have to admit my test platform uses just a couple of cameras on an i3 with a laptop hard drive.

I've been tuning an Xubuntu Bionic install for a couple weeks now. Wish I'd just done a minimum install as you describe. But I've de-installed and turned off so much non-essential stuff my system is probably equivalent to a minimal setup by now.

Of all the things I've done to improve performance, the things that seem to have contributed the most improvement:

I've also tuned the typical ZM options in in favor of performance.

I'm presently running with Motion Frame Skip set to 2 for each cam. This is supposed to reduce analysis load somewhat and I'm seeing that. So far I'm not having any issues with motion events being missed - but I'm still evaluating.

Anyway my system now hovers at around 0.30 load with all cams running (no motion events). The actual CPU usage is typically low - like 8-15%. What contributes the most to the load factor numbers on my system is I/O related.
Top

I've had a busy week and didn't find the time to test this until now.

For anyone who's not done it before, In ubunutu 18.04 making only the changes to grub

In grub… modifying only this line adding: spectre_v2=off nopti pti=off

After 3 hours bedding in, same services running it's very close to the former utilisation, in fact, marginally improved.

However, I have now exposed a known CVE on an internet facing server which isn't great but given it is a home server and I have a number of compensating controls I'm comfortable with it, but each to their own.

Thanks for the suggestion, the impact on ZM of the Page table isolation was far greater than I'd expected.
Top