One image on event playback, then black screen?

Forum for questions and support relating to the 1.25.x releases only.
Post Reply
2 posts • Page 1 of 1

One image on event playback, then black screen?

Help. What have I done?

Every time I try to play an event, I get what looks like 1 frame, then a black (event video) screen area / square.

In the middle of the screen is what looks like white text but is gibberish. [Later: I now see a countdown timer happen. Hits 1, and stops. Same black screen, nothing happens.]

Opening the monitor window is fine, video wise. Event lists are fine. But playback of an event gives the above.

zm has been restarted, repeatedly. Apache2, too, for that matter.

Please can someone help.

This has happened after I changed some options. I don't remember in particular which ones, but I would not have changed anything unusual / unreasonable. I've tried flipping various ones back, to no effect.

It may not have been working 'optimally', but at least it was all working.

First - it does not seem to matter what I do, cambozola / java tries to start (in Chrome) [problem happens in firefox too.] - option installed checked, or not. It wasn't on originally, and I don't want it on, but it still seems to be on. Only if I take out 'cambozola.jar' does it not actually start. (Otherwise, standard cambozola line of text at startup.) Java is still being asked to load, but it fails with unknown class.. Nothing works (per above) - putting cambozola.jar back in at least still gets me the black screen.

Since it also happens in firefox, I now get that the original problem above is not a cambozola issue, but I'm at a loss as to what I'm looking for.

Options I believe I played with:

- paths / use a deep filesystem - unchecked. (Was checked before - happy with it unchecked. So far.)

= THAT WAS A BLAST! All my prior events disappeared without warning! {sigh} [Still unchecked.]

- Web / 'Should the monitor window play a sound if an alarm occurs ' now checked. (No sound specified.)

= this is where I believe I hoped I would get away from java.

- Images / 'Is the (optional) cambozola java streaming client installed' originally unchecked. Have since tried it both ways, to no change. Including at one point, feeling like the option wasn't getting turned off in some config file or something.

(ffmpeg has always been installed and appeared happy.)

- Upload / 'What format the uploaded events should be created in.' tar -> zip.

- High B/W / 'Which method should be used to send video streams to your browser.' mpge -> jpeg -> mpeg. [Going to jpeg seemed to give one frame, then stop.]

I don't see which of the above has anything to do with the problem. Suggestions needed. 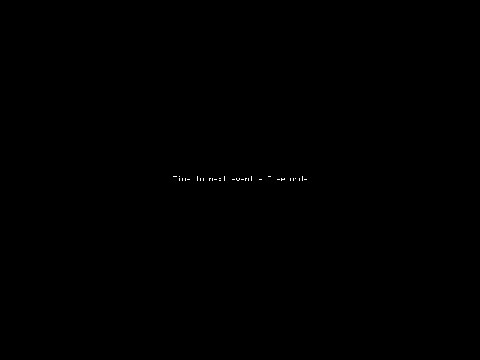 Re: One image on event playback, then black screen?

Is this screengrab taken from the"Event" view?

This makes me think that maybe you have the event view showing "Replay: [All Events]", where it pauses and shows that screen until it's "time for" the next event, i.e. real time. The alternative is a setting of "Single Event" or "Gapless Events", where it shows the event and stops, or shows events back to back with no regard for preserving timing (respectively).

This option appears on the event view page, and is remembered, it's not under the (many) Options/Config pages!

Did you change it by accident?
Top
Post Reply
2 posts • Page 1 of 1