Forum for questions and support relating to the 1.27.x releases only.
Post Reply
15 posts • Page 1 of 1

Last night was a bit foggy and I think my IR cameras were actually seeing particles of water in the air reflecting back the IR led's. When I looked at events or live view it looked like a sand storm, particles flying around all over the place. There wasn't a strong wind and all the particles on the screen appeared to be very close to the camera.

Is that possible? I don't remember my old setup ever doing this. But it was lowdef analog cameras, the new setup is HiDef.
Top

Have you tried cleaning your lens of the camera? I need to clean it once a while or otherwise I will see some glare or dust like thing at the edge of the image.
Top

That's not the problem. I just mounted the camera yesterday, and what I was seeing was something moving, it appeared to be very close to the camera, so close that it was hard to determine exactly what it could have been. Now that it's daylight and the IR led's have shut off the image is quite clear and stable.
Top

BiloxiGeek wrote:That's not the problem. I just mounted the camera yesterday, and what I was seeing was something moving, it appeared to be very close to the camera, so close that it was hard to determine exactly what it could have been. Now that it's daylight and the IR led's have shut off the image is quite clear and stable.

Spirit orbs. Zoneminder detects them by default, you need to disable it in the config ...

Yes it is possible that droplets of moisture close to the camera could catch the IR light and reflect it, I've seen it a little on one of mine, but only in heavy rain. Little sparklies passing through the picture.

It could also be particularly daft insects, you never know.

I suggest you save the video and post it to a paranormal/UFO investigation site, you'll get far more crazy answers ...
Top

Are you sure you are not seeing the affects of AGC?
As the light level decreases, the camera will boost the gain of the image, which naturally also boosts the noise in the image. You end up with a grainy image. All cameras do it. Some are worse than others. It makes tuning your motion detection more difficult, but it beats seeing nothing at all.
Visit my blog for ZoneMinder related projects using the Raspberry Pi, Orange Pi, Odroid, and the ESP8266
All of these can be found at https://zoneminder.blogspot.com/
Top

Pretty sure it wasn't the AGC, I was seeing something move through the frame. Actually a lot of little somethings.

It really looked like there was a dust storm happening.
Top

BiloxiGeek wrote:Pretty sure it wasn't the AGC, I was seeing something move through the frame. Actually a lot of little somethings.

It really looked like there was a dust storm happening.

I ask because that is also what AGC looks like .... a dust storm happening.
You'll know soon enough because it'll happen every night.
Visit my blog for ZoneMinder related projects using the Raspberry Pi, Orange Pi, Odroid, and the ESP8266
All of these can be found at https://zoneminder.blogspot.com/
Top

Have the exact same issue. See the attached photo. Looks like fast worms travel over the view area very near the camera. It lasts only 1 to 2 frames.
Over the night there were more than 70 detected movements. That is very annoying.
The camera is Dahua DH-IPC-HFW2320R-ZSVFS (3MP, motorized lenses, 4 strong IR LEDs). The motion detection is on a second VGA resolution stream.
ZM-1.30
Another camera from Tiandy (4MP) is also connected, but there are no "worms" over night (but IR lightning is awfull, 24 LEDs, each creates bubble on the frames).

Have anybody any solution to the "worms" problem - eliminating movement detection - camera settings or Zoneminder zone settings?

Looks like there is a large number of users having the same problems waiting for a solution?

Someone mentioned UFO - it is not the right place for that, and make full of a real problem is not a polite way of writing. 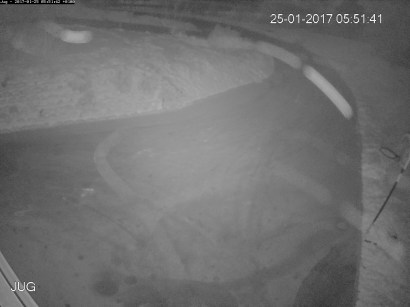 You could try playing the zone settings to increase the alarm thresholds, so 1or 2 frames don't trigger the alarm, people don't move that fast. Image posted it is hard to tell, but normally for me white fast streaks are bugs who love IR. Mounting IR elsewhere and disabling cameras IR can help.
Production Zoneminder 1.32.3
Random Selection of Cameras (Dahua and Hikvision)
More Dev VM's than I care to count.
Top

Thank you for a suggestons. It's impossible to eliminate alarms triggered by those arifacts. They dance allover for a few hours and at one time they completely vanish. Some nights are very disturbing for cameras, and some are entirely quiet (100% absent of those worms). Those were no living species or dust. The image was captured at -15 deg. Celsius on a very cold winter night.
Some mentioned conspiracy theory: Artifical nano particles from flying objects over our heads poisoning us.

I do not have any logical (physical) explanation for this.
I can confirm only that this phenomenon is independent of weather, humidity, air temperature, and time. It's only visible at night, sometimes it lasts hours, sometimes only a short time (hour), sometimes spend a night without any.
Search online returns a lot of that all over the world.

So the explanations are very welcome.

If you are saying independent of weather then I am stumped. If it was just occurring in -15C I would be wondering if it was some form of condensation or heat vs cold effect. We only see the opposite weather here +40C.
If you are interested in playing I would try a cheap IR light instead of the built in leds, see if it is some reflection type issue. Or use an exterior light to force camera into day mode and see if same thing appears.
Real pain in the butt so hopefully you can find the cause.
Production Zoneminder 1.32.3
Random Selection of Cameras (Dahua and Hikvision)
More Dev VM's than I care to count.
Top

I get something which may be similar or same, I can' tell from the posted image. My problem is, as SteveGilvarry noted, bugs. Spider webs seem to greatly enhance their IR reflectivity when moisture is very high, at or below dew point. They can appear as strings which look like you would expect them to look, but also, when they are curved by breezes, sometimes only a portion of the curve reflects IR and they can take some very strange forms. They tend to disappear during the winter because the spiders go hibernate or something, but return in spring.....like right now.

The whole IR and fog reflectivity problem is a real issue for me. Im located in the foothills of the Appalachians, and sometimes the fog can be so thick that visibility is limited to 25 feet or even less once in a while. The motion detection goes completely bonkers, any breath of wind will set it off when the fog is thick. As SteveGilvarry noted, you can adjust some of the settings to reduce the False Alarms, but on foggy nights, I expect to get FAs, its just how it goes. Snow also will result in lots of motion detection, but that's not all so often in East Tennessee. Rain does not seem to offend the motion detection code nearly as much.
Top

Here is spring right now.
The cameras catches some moths during the night mode with IR lights.
I append the original size photo from the second camera. It catched a "flying spring". Looks artifical to me.
The camera is set at 10 photos /second, and there were 3 with that spring. All are the same with no change in shape, direction, rotation or else. The direction of movement is in line with the long side of this thing.
I have successfuly reduced alarms created by those things to acceptable minimum - 0 to < 5 over night.
There were much more this UFOs over winter. Strange as there is no rain for over 6 weeks and nature is dried, dust was expected.

I was reading about night view, IR LEDs in camera and suggestions like here.
Do not bother me much, just curiosity. Want to have simple system, remote IR lights complicate this, as they need power suply. All my cameras are POE. So just UTP cables and no other wires. 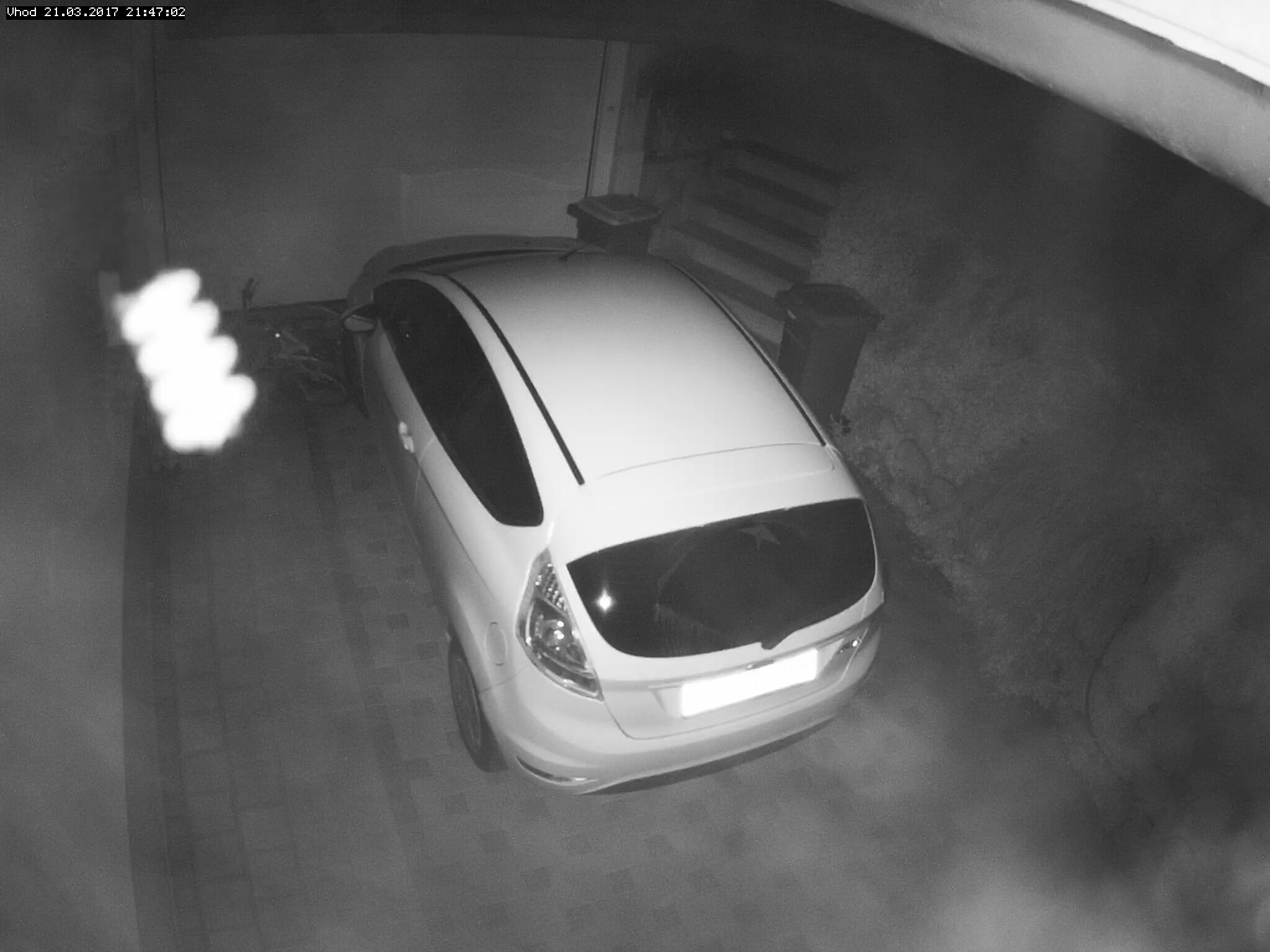 I have seen quite a few moths, far too many spiders but just recently I have quite a few round "floaters".

These only occur at night and seem to be transparent, like a soap bubble and always moving at about the same speed with a slow zig-zag or even a circular motion.


Those of a certain age might remember "This is the voice of the Mysterons, we know you can hear us"
I dont record sound at present, maybe I should as a check for Mysterons
Top

one suggested placing mothballs under the camera this doesn't initially get rid of the spider webs but we'll keep the moths away and eventually for my goose case within a day I don't have to worry about spider webs.

I have had up to 900 events in one night... there's no real way to fix this unless you great them kind of script to automatically switch profiles during night... meaning set the max threshold at night too much higher than in the day... I also have a similar issue with shadows from trees etc that's why it's ideal to place it under something and ain't it at something that you know won't be affected by the environment shadows spiderwebs snow etc...
Zoneminder Darknet yolov2
viewtopic.php?f=36&t=26906